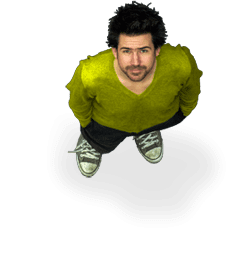 Jo Schramm made his debut in the theatre in the lighting department of the Schauspiel Stuttgart. Here he worked for four seasons before studying architecture at the Kunstakademie Stuttgart and scenography / media art at the University of Design in Karlsruhe. Since then he has worked as a set designer, light and video artist for acting, dance and opera. Productions with his stage designs have been invited to the Berlin, Swiss and Chinese Theatre Meetings, the Wiener Festwochen, the Autorentheatertage in the Deutsches Theater Berlin, the Ruhrfestspiele Recklinghausen, the Prague Theatre Festival, the TeArt Festival in Mins and the Festival Radikal Jung in Munich.

Several times, his works have been nominated as stage sets of the year in the specialist magazines Theater heute and Opernwelt and he was nominated for the German Theatre Prize DER FAUST for Medea at Schauspiel Hannover.

He lives with his family in Berlin.